Our closet has been ruined ...

I go home and what I see?

For some reason, under the ceiling, the head of a bun sticks out and she is not satisfied with something.

How she got there and the main thing - why, I did not understand. 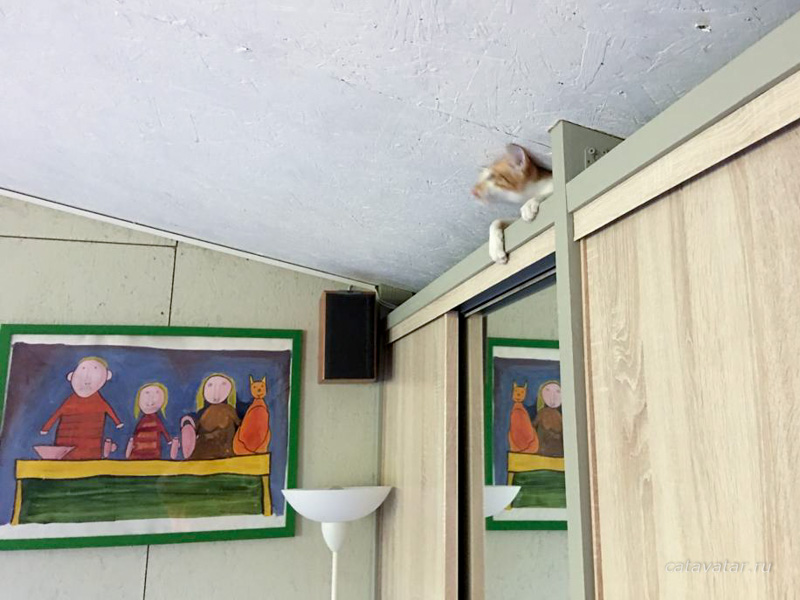 I had to open my wardrobe wider and help me out.

Bun decided not to wait for my hands, but chose to push off with their sharp claws from shirts.

What's up with the hooks until you looked ...)) 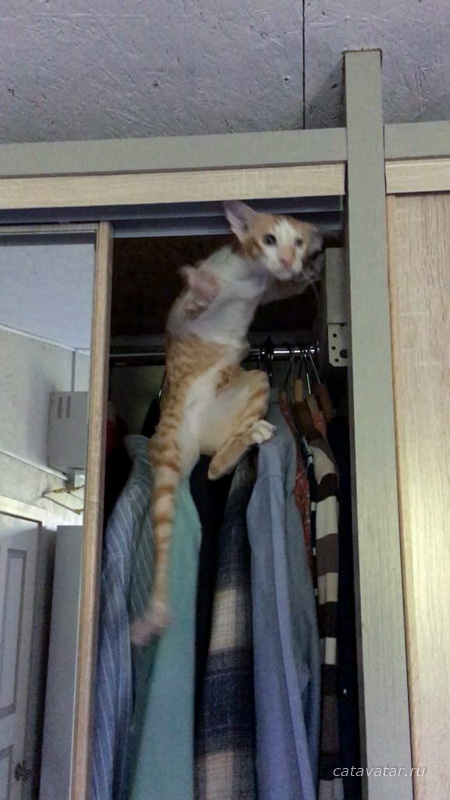 It seems that not only shirts have suffered))

After all, in order to climb up some kind of support is needed, and things hanging on a hanger are not very stable ...)) 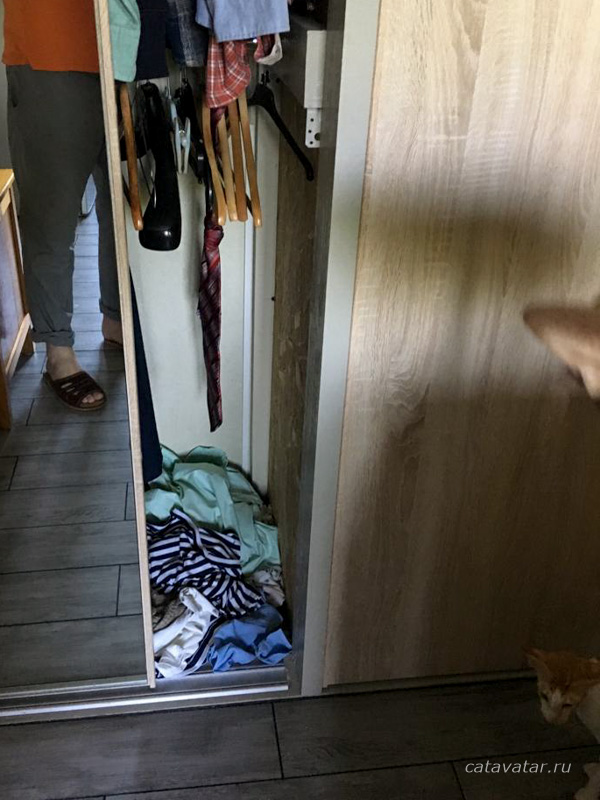 Sometimes it is simply surprising how well the laws of genetics work in Nature!

Since childhood, he was pulled into the mountains)) 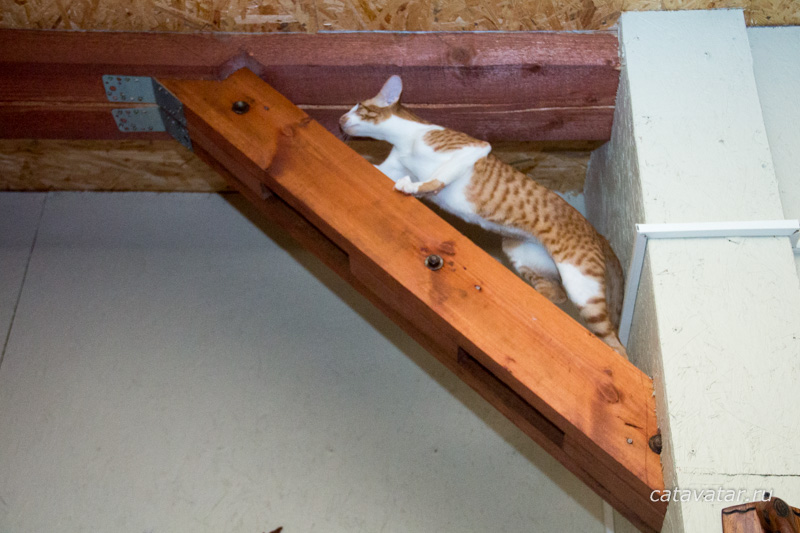 He skated on the doors, lived on a high refrigerator, mastered the stabilizer right under the ceiling))

The principle “the higher the better” is from his birth and judging by the stories and photos in the new house, everything is the same)) 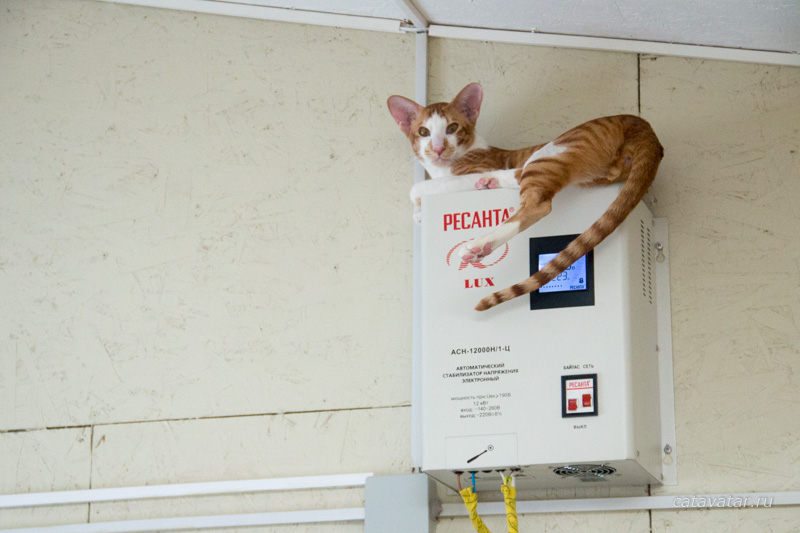 In addition, Dad has always been partial to this cupboard and mirror.

It never happened to get to the top - when the opportunity arose he had already finished such a bum for himself that he couldn’t get through there. 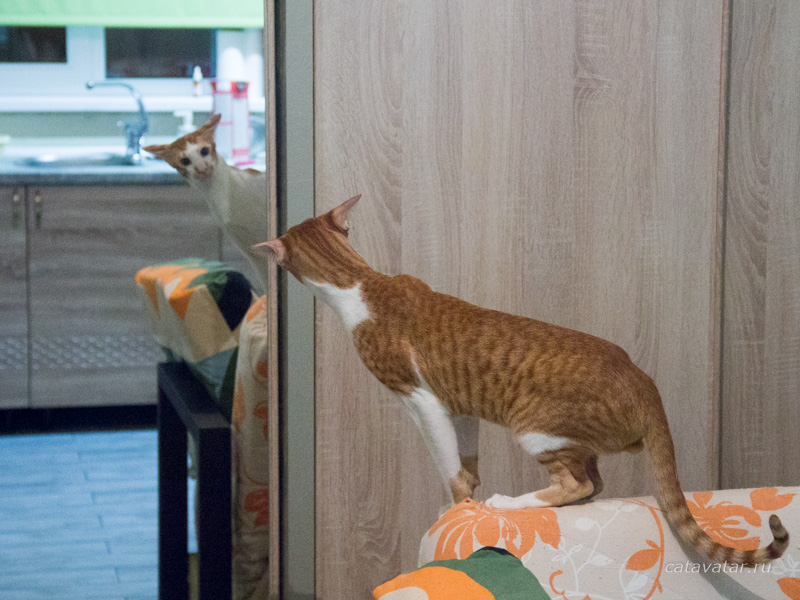 Both the father and the Biscuit have these inclinations from Mother Shai.

(It sounds like an ominous riddle or terrible incest, but Shaya is a mother for both of them ...)))

Shaya, too, since childhood, is a lover of topcovering.

When she lived in an apartment she didn’t get off the kitchen cupboards, and we had nothing above them))

Well, the founder of this dynasty of climbers, of course, is Terochka - the Mother of Spotted Drokon))

Terochka, too, all the time pulls up.

Even now, after two heavy surgeries and three chemotherapy, she prefers, if she can vomit, then climb higher for this ...))

In the photo she is still quite young.

It seems also she has not even had oriental kittens yet)

We then just did the repair and the furniture was not understood, to climb no where. 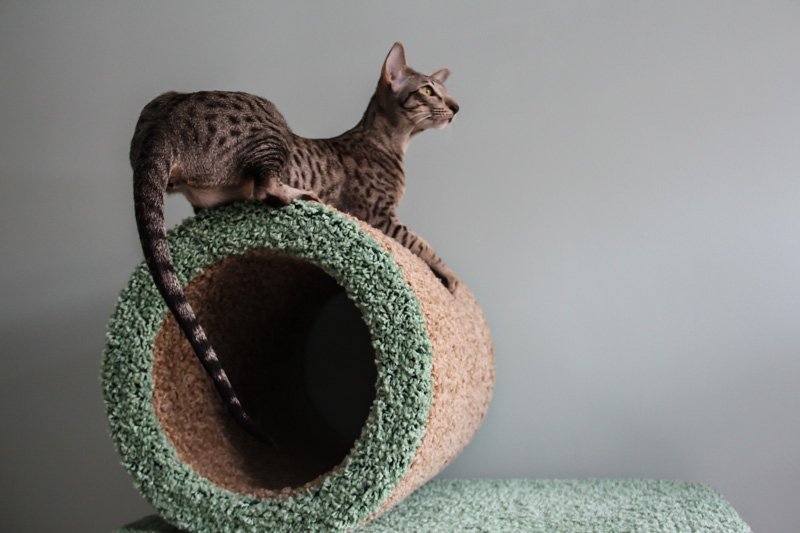 Genetics is still an amazing phenomenon.

Some strong genes are passed on from generation to generation, with difficulty blurring.

Not only external signs, but also character traits.

On the Terochkina line, a powerful stain is very often transmitted in the exterior, and in character it is very clingy and childish.

And on the Nyusinaya line often go green eyes and head profile, and in the character of severity and motherhood.

Or now Timastik (I hope he is good at the Rainbow !!) gave me all the fryiness, and the boys had dry muscularity and durability. And kindness to people))

So at first I wanted to swear at the kitten, and then I thought that she was not to blame for anything!

This genes are to blame.

This genetics makes her behave that way!

That's right, this very genetics in Russia was forbidden!

Up-down
Our cats are new :)
Up-down

Pensive ))
The girl thinks she is pregnant... This is a good time to think about Eternity :)
Pensive ))
comments powered by HyperComments
You are reporting a typo in the following text: Simply click the "Send typo report" button to complete the report. You can also include a comment.